Recently the Force.com Developer certification was retired, and all certificate holders were encouraged to switch to the Platform App Builder certification. Which is exactly what I did. One of the things that stuck out to me though, was ‘what is the difference between Process Builder and Workflow’?

What is Process Builder and Workflows?

So let’s start at the beginning… What exactly are Process Builder and Workflows? In short, they are two features within Salesforce which allow you to build process automation within the system.

Both, Process Builder and Workflows, are very similar in the fact they allow you to define criteria and then do ‘something’ automatically without the need to code. This is what is called Declarative Development, or in Salesforce speak ‘clicks-not-code’ may be something you may have heard.

You may have a process requirement you can automate for your users. For example when an Opportunity is updated to ‘Closed Won’, you then need to create another record (like a Contract) and send a notification to the Fulfilment team. This type of process can easily be done using the process automation tools within Salesforce, with no coding skills required.

This is one of Salesforce’s strengths in the CRM space. A large number of other CRMs out there, typically did not (and still don’t) allow any users within the system access to this type of process automation. Instead requiring custom development / coding to setup or buying additional expensive add-on packages.

Workflows Rules allow you to define a set of criteria. And then you control when the rule might fire (eg when a record is created, or every time it is updated).

Additionally when the rule fires, it can be set to complete a number of the following actions:

As a result, most Admins can then automate business processes with simple clicks-not-code. 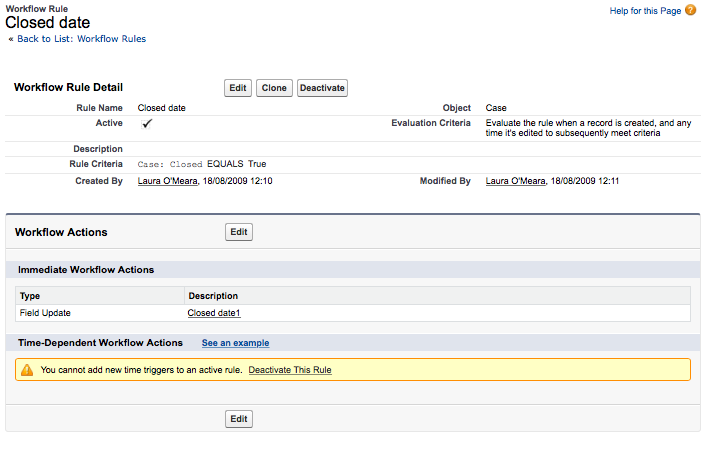 But there was still a ‘wall’. This would be the point that you would have to move over to Apex triggers and classes to continue automating more complex processes…

Additionally, there was no easy way to follow the entire process within the system. If you had multiple workflows firing at different steps, there was no way to see these easily. Diagnosing issues in a process become very complex. And Process Builder was born!

Process Builder, or Lightning Process Builder as it is now called, started life as a beta in the Winter ’15 release. And one of its main goals was to allow Admins to create the entire process in one place, rather than using multiple workflow rules.

So the big ‘win’ here how you can connect different steps together to make a single process flow. And it is very visual.

Also by creating a complete process, you can also control which step is executed when. This was an issue with Workflow Rules, you couldn’t specify the order in which a workflow rule would be processed. At least not without a lot of cumbersome customisation work (new fields, extra workflows, field updates, etc).

Process Builder simply allows you to drag and drop your rule criteria. Meaning you can have more control over the order things are processed:

Add into the mix, some of the more advanced features which Process Builder now allows Admins to do:

This is where we start to see some of the key differences between Process Builder and Workflows.

And you can start to see why Process Builder has been created. It continues to drive the ‘clicks-not-code’ philosophy further, and continues to bridge the gap between what Admins can do versus Salesforce Developers.

So, what is the difference between Process Builder and Workflow?

To give you a high level breakdown between the two, let’s compare them side-by-side:

There are one additional thing to consider though, namely existing automation within your org. Especially around support when bulk inserting or updating records (eg when updating 30,000 records via Data Loader). The good news is that Process Builder was ‘bulkified‘ (as of Winter ’16). However there can be issues when the code may not be setup in a way which accounts for Process Builder. This is something that Workflows handle without much further consideration…

Existing Triggers, Workflows, etc may need to be reviewed to ensure Process Builder will work nicely alongside. Here is a detailed breakdown from David Liu over at SFDC99. It is a guide to when to code versus when not too, but it is aimed at advanced admins/developers.

The way Process Builder manages bulk requests is a point worth considering before implementing Process Builder.  A bulk request can be from importing contacts into your CRM, or an integration which updates a number of records as part of its process.

When designing your solution, you should also focus on scalability and overall robustness of the design.  What do I mean by scalability?  I am referring to the the ability of your solution to handle increased volumes of data in the future.

This article from ShellBlack (refer Rule #4), dives into the topic of Bulkification and Process Builder further.  And advises on some of the points you should consider before choosing Process Builder vs Workflows.

A further discussion point on the Trailblazer Community Idea also expands on this topic.

For a full breakdown of the automation tools within Salesforce, you can view the list in Salesforce Docs.

And if you want some hands-on practise, around implementing an end-to-end solution, there is a Process Automation Specialist Superbadge on Trailhead. These Superbadges cover the relevant theory but also gives you a use case and business requirements that you then need to solve and create the correct solution.

Alternatively, if you don’t feel like completing the Superbadge at this stage – you can always go direct to the Trailhead quick-start module on Process Builder.

UPDATED 23rd July 2018: to expand on the issue of bulkification and Process Builder

How to setup Live Agent in Salesforce